Hit enter to search or ESC to close
aktualitanapsali-o-nas

Canadian Ambassador Barbara C. Richardson opened the 9th annual Equal Pay Day Women to Themselves Conference with a compelling keynote address on equality in the workplace and advancement of women into positions of influence and power.

As the Ambassador of Canada to the Czech Republic, Barbara C. Richardson has been actively pursuing her diplomatic agenda, the strongest point of which is women’s empowerment. Canada is one of the world leaders in promoting gender equality and supporting women’s rights. Canadian diplomatic missions abroad are taking actions to empower women. 50% of appointed Canadian Ambassadors are women. Despite this impressive statistics, Ambassador Richardson stressed that this is a result of very recent actions. Actions that have been taken only during the last decade, that allow women to take high-level diplomatic positions.

When she started her career in the foreign service there were very few women in senior management positions and it was the same with female diplomats, female ambassadors. So at the early days of her career, she was not aspiring to the position of ambassador, because “it never occurred to me that it might be possible. There weren’t any role model or they were extremely limited.” She continued by saying “This position is my third positions as an Ambassador, and if I want to be brutally honest – the opportunity to hold the first position came because I had a male mentor.”

“The barriers that women have in the past and the barriers that they face today are significant.  In my country, the barriers have changed in a way that they became more subtle, but challenges are still there. However, what I think and what I find very inspiring is that none of these obstacles could stop us from seeking opportunities, to prevent us from finding our own happiness and implement our own vision in life – and we did it. We do it. We jump over the barriers, we climb over them and we overcome them.”

Ambassador Richardson quoted Charlotte Whitton, Canadian feminist and the first female mayor of Canada’s capital city Ottawa. “She was a witty, very very tough woman. She was famous for one of her quotes in which she would say:

“’Whatever women do they must do twice as well as men to be thought half as good. Luckily, this is not difficult.’” — Charlotte Whitton

In conclusion, Barbara C. Richardson said:  “I hope that you leave this conference with inspiration, with ideas, with creative energy. I want you all to remember that I believe very strongly that all is possible and you can accomplish anything when you believe in yourself no matter what anyone says or think about you. That our dreams come true when we see them as actions framed into plans, so I encourage you to go after your dreams and believe that all you want is possible to achieve.”

Barbara C. Richardson was appointed Ambassador to the Czech Republic in October 2016. During her impressive diplomatic career, she has served as the Political Counsellor and Deputy Head of Mission in Kenya, she was also Canada’s Deputy Permanent Representative to the United Nations Environmental Programme (UNEP) and to the United Nations Centre for Human Settlements (UN-HABITAT). She was Canada’s High Commissioner to Bangladesh, and then Ambassador to Zimbabwe and Angola and High Commissioner to Botswana. 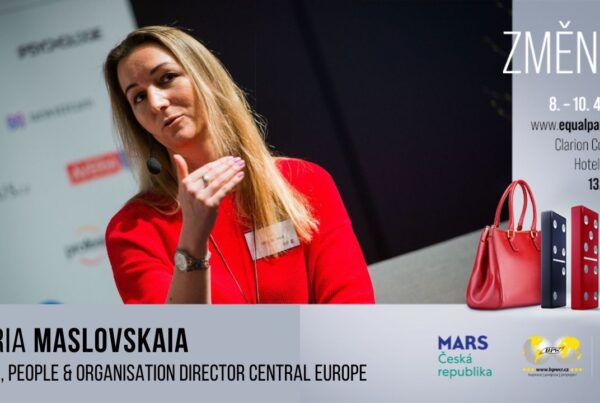 Daria Maslovskaia: We give colleagues flexibility in terms of working hours- we manage by performance and task management, not by hours